The Shiite, the Army and Human Rights

The clash, last week, between the Nigerian Army and members of the Shiite Islamic sect in Kaduna brings to fore the issues of human rights, including religious freedoms, the maintenance of law and order, peaceful coexistence and sovereignty, among others. 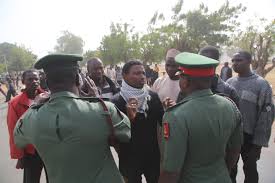 Photo courtesy of The Leadership Newspaper.

As usual, there are different narratives to the incident, coming from different quarters. The best I can make out as facts in all the narratives are as follows. That on Saturday December 12, members of the Islamic group were involved in an annual event, a pilgrimage of sorts in Kaduna State, during which time they took over a major highway that links Kaduna city and Zaria city, two major cities in the state.

At about the same time, the Chief of Army Staff (COAS), Lt. Gen. Tukur Yusuf Buratai, on official duties and with an entourage, was traveling between Kaduna and Zaria. His team ran into a human roadblock created by the Shiites. After several minutes of negotiations for unimpeded movement by the COAS, members of the religious group still resisted the passage upon which the Army entourage applied force to ensure their movement. It is a fact that such force led to deaths, injuries and destructions. It is also a fact that the Army followed up on the encounter by going to the headquarters of the group much later, and even into the next day. In the process, they killed many more people and destroyed property.

I believe this incident was totally unnecessary and avoidable. Here are my reasons for that. It would have been proper for the organisers of the event by the religious group to put in place arrangements to ensure that their right to freedom of worship did not thereby impede on the rights of other to freedom of movement among other rights. Given the volume of human traffic, did they consider requesting and did they get the assistance of the police for the purpose of crowd control and ease of movement? That would have ensured the maintenance of law and order and peaceful coexistence with others who had to be in that vicinity and were not necessarily part of their meeting. The point has to be made that it is no longer fashionable for event organisers to convert public ways to personal and private purposes, against the main purpose of such facilities without adequate approval and provisions for alternatives for members of the public.

Looking at the video clip provided by the Army, I am unable to understand the reason the adherents refused to cede the public highway to other legitimate road users. It baffles one the more when one realises that it was the chief of the Nigerian Army who was virtually begging to be allowed free access on a public highway. I watched an interview on one of the television stations with a spokesperson of the group where he questioned why the COAS did not consider retreating and taking another route when he was denied access. That, to put it mildly was inane. I cannot imagine what message that could send to the rest of the society that a group of citizens would take over a public highway and order the COAS to go back!

Having said the above, was the Army justified in their reaction and the extent thereto? I believe they were justified to take necessary and reasonable force to clear the road and allow access to the COAS and his entourage and other road users. But having regards to the extent to the destruction of human lives and other property, I daresay that the Army went overboard in their action. Curiously the video released by the Army (the one I watched) did not show when actual action was taken to clear the road for one to see the extent of force used.

I am even more concerned with the further action of attack on the headquarters of the Shiite movement, which is where many more deaths are said to have occurred. The fact that the group members were involved in one incident of lawlessness does not therefore render their headquarters subject to attack, unless there was evidence of more criminal activities being carried on or brewed there. Truly, that further action could have been avoided, having regards to our recent experiences with similar groups. That is why I expect the Nigerian government to immediately investigate what exactly happened and act in the interest of justice and human rights.