Yippee! It’s World Teachers’ Day today. Oh, well not too many people may be aware of that fact. Not that they couldn’t be bothered I guess; just that the day, like many things about teaching, has not been made popular enough, at least in our climes here in Nigeria.
I don’t really have the time to start dwelling on the problems of teaching and how poorly appreciative we are of the men and women who have helped mould each one of us right from the cradle. All that I would try to do here is go way back in time and remember some of the best teachers I have had in primary and secondary schools.  No doubt I may not remember all of them (it’s been 41 long years since I first began formal education) but I would try all the same. 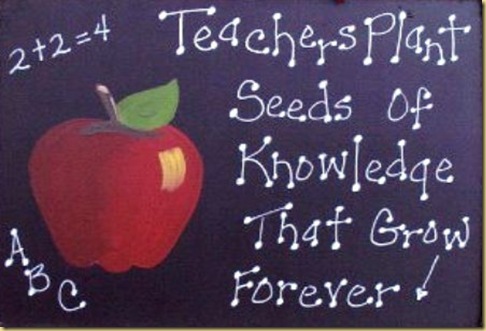 Here with my personal list of honours for my teachers.

Mrs. Eta: I remember Mrs. Eta, my first teacher in school, AME Zion Primary School, Diamond Hill, Calabar. She was that quintessential teacher you would find in 1974, that helped ‘wean’ off a clingy five year old from his father by giving him the special care and attention he needed to get used to the school environment.

Miss Eleng: My teacher in primary 3C. She was a teacher on ‘student practice’, as they called them. She was young and playful. The fact that she could not speak the local Efik language meant that we had to polish up our English language skills.

Mr. X: (Oops, I’ve forgotten his name hence the use of ‘X’) My Primary 6 teacher, a tall dude. We enjoyed his tutelage but he was a terror when he got angry. I am not too sure now but I think his name was either Mr Asuquo or Mr Ekpenyong. Well, don’t blame me, it is more than 36 years ago now.

Secondary school was more fun for me, thanks to the wonderful teachers we had in Hope Waddell Training Institution, Calabar.

Mrs Panchallingham: My Class 1 mathematics teacher, whose husband taught physics to the higher classes. They were Indians (or is it Sri Lankan, but we saw no difference in the two countries). We could swear the woman was a witch, the way she went about solving maths and giving us all that stress of adding ‘n’ plus ‘m’ or subtracting ‘x’ from ‘y’. Today I really wonder how come we don’t see the Xs and Ys in real life. Lol!

Mrs. Henshaw: My Class 1 English teacher. She was the prim and proper teacher whose class I exceedingly enjoyed.

Mrs. Umunakwe: Her literature classes in class 1 saw us read interesting poems and prose like Tales out of School. It was in her class I learnt that the past tense of the verb ‘burst’ is ‘burst’.

Mrs. Asukwo: (I hope I got the name right) She taught me English in classes 4 and 5. She was a huge lady whom we called Igor or Igoress, in reference to the wrestler, ‘Mighty Igor’ (God please forgive us).

Mr. A. A. Ikoiwak: Our no-nonsense literature teacher in classes 4 and 5 who made us see both the ‘seen’ and ‘unseen’ poems. The way he broke down the meanings and nuances of poetry marvelled us all. I have just called and spoken with him today and I am further awed. At 83 going to 84, he is still in his elements. I mentioned the line ‘O young Lochinvar is come out of the west…’ and the man went all through reciting several more lines.

Mr. Umoh: This teacher of government was a genius, taking us through the maze of the three arms of government and telling us about governments in the pre-colonial and the early days of Independence of Nigeria. The second republic collapsed right in our hands in class 4!

Miss Ekaete Umo: She taught us biology, dissecting the human anatomy and getting us boys go naughty with side talks. She had no problems teaching biology in an all-male school.

Mrs. Jaja: The geography teacher in class 4 who would nearly cry when she saw how unserious some students were with their work. She gave geography a life, the way she handled it.

Mr. E. U. Esara: He taught us Bible Knowledge and I enjoyed his teaching of ‘the synoptic gospels’ He was also popular as the teacher in charge of arranging students to bring down the grasses in the school.

N/B: After this post was first published in 2012 http://oboeffanga.blogspot.com.ng/2012/10/my-teacher-honours-list.html, a few persons asked how come I missed out one name. Of course there was my first and all time teacher (formally and informally), my late father, Mr. Obo Effanga (Snr) but this space is not enough to talk about all the things he taught me which I still live by. But be assured that he taught me in my classes 4 and 5.
Share:FacebookTwitterLinkedInWhatsApp