A peep into the Code of conduct for public officers
Add comment
Share:FacebookTwitterLinkedInWhatsApp
Articles

A peep into the Code of conduct for public officers

Nigeria’s problem is not so much about the lack of rules but more with the breach thereof and impunity.  Take for instance the provisions of the ‘Code of Conduct for Public Officers’, which forms part of the Nigerian Constitution, in the Fifth Schedule. That Code is very clear as to what public officers must and must not do. Yet, the same officers flout them without any sanction, much like many road users are bound to break road traffic rules with impunity.

Whenever I see such audacious disregard for the law, I am tempted to believe that some of the perpetrators may be doing so more out of ignorance of the code than anything else. If so, shouldn’t we then focus on making the laws known to the persons and others who may someday be in those positions or may consciously or unconsciously be aiding and abetting the breach. That, I intend to do in this discussion. 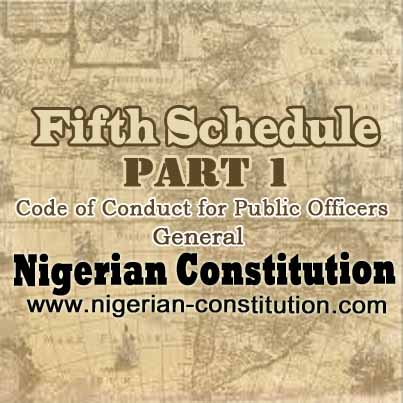 The Code lists 16 categories of public officers to include the president and vice president; state governors and deputies; Senate president and deputy; speaker and deputy speaker of the House of Representatives; every judge and staff of law courts; federal ministers and state commissioners; all members of the armed forces; all personnel of the police and other security agencies; all personnel of the civil service (federal or state); officers and staff of all Nigerian missions abroad; chairpersons, members and staff of the Code of Conduct Bureau and Tribunal and of local government councils. It also includes chairpersons and members of boards or other governing bodies and staff of statutory corporations and of companies where the federal government has controlling interest; all staff of universities, colleges and institutions owned and financed by federal, state and local government councils and; chairpersons, members and staff of permanent commissions appointed on full time basis. Simply put, virtually everybody connected with government is captured in this definition.

Just a few provisions of the Code would suffice for this discussion. The Code starts by stating in paragraph one that a public officer shall not put himself (or herself as the case may be) in a position where his/her personal interest conflicts with his/her duties and responsibilities. This summarises the guiding principle of the Code. But apparently in Nigeria, most public officers see their office as an opportunity to promote their personal interests first. And too often, their supporters expect and prompt them to act that way. Now who doesn’t know that all the fighting we saw lately in the National Assembly were as a result of personal interests conflicting with official duties and responsibilities?

In Paragraph 2, the Code precludes public officers from receiving ‘emoluments’ of more than one public office at a given time. The code defines ‘emolument’ as ‘salary, wage, over-time or leave pay, commission, fee, bonus, gratuity, advantage (whether or not that advantage is capable of being turned into money or money’s worth), allowance, pension or annuity paid, given or granted in respect of any employment or office’.

Could it therefore mean that the several retired public officers (military and civilians) who have found their ways again into other public offices have been in breach of this Code? That would be so if apart from receiving the emoluments of their present offices, they are still receiving any form of emolument (pensions etc.) from their former employments. There is yet another area that needs scrutiny. The Chief Justice of Nigeria (CJN) is equally the chairman of the National Judicial Council (NJC), a Federal Executive Body established under the Constitution. Would the CJN be in breach of the Code of Conduct if he appropriates any such emoluments like allowances and vehicles from the NJC while he already does so through the office of the CJN?

The same paragraph 2 of the Code requires that a public officer on full time employment shall not ‘engage or participate in the management or running of any private business, profession or trade’ apart from farming. Therefore, as many of our public officers as have businesses they run, promote and benefit from, are in breach of this code. It would be interesting to audit procurements in offices to know the extent of this breach. Obviously, the breaches would be too many to cope with for appropriate sanctions. And what I have so far listed here is a fraction of the all the provisions in the Code. What therefore should the Code of Conduct Bureau do, knowing that they are overwhelmed? The response cannot include not doing anything about anyone at all. They have to start something at least.