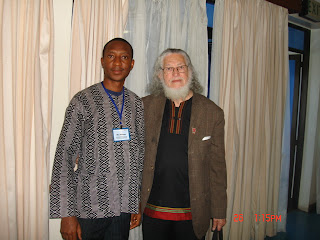 In the middle of a film session he walks in
Quietly, somewhat unobtrusive
But for the few who noticed him and clap

Quietly at the back he goes to sit
Film over, lights on and Dennis is introduced
The great poet and activist is with us

Isn’t it great to meet the great Dennis
To learn from the ageing yet steely idol
How he feels to be 83 and still counting?

By Obo Effanga on the occasion of Dennis Brutus’ 83 birthday during the ActionAid Economic Justice Training at Kenyan School of Monetary Studies, Nairobi. November 28, 2007