It is not every time one writes about one’s former school, even though a huge content of an individual’s character is traceable to where the person was educated. As the saying goes, ‘if you’ve got it, flaunt it’, I wish to flaunt my alma mater, Hope Waddell Training Institution (HWTI), Calabar, which turns 120 years old this Sunday. For starters, who wouldn’t be proud to celebrate an institution that has shaped society in many ways for all of 120 years? Just about five schools in Nigeria have so far achieved this and all within Lagos. And so, as my alma mater marks that age this week, I cannot but write about it. 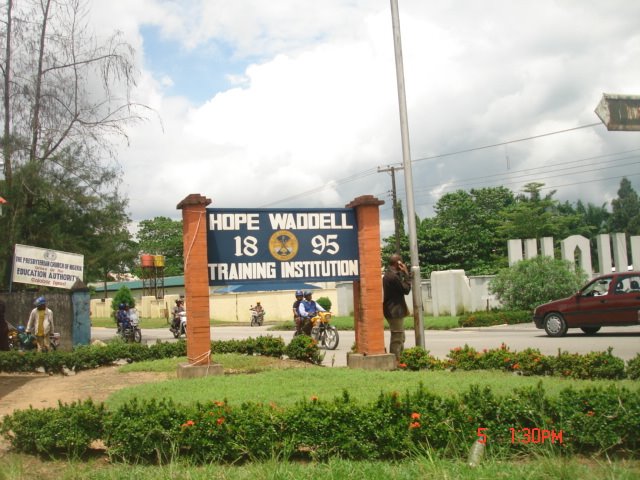 My sentimental attachment to Hope Waddell (stylishly called Howad) draws from several reasons, one of which is family tradition. In fact, I am only the third generation of my paternal family to have studied there. My grandfather went to the school and my father did not only study there but later on taught for about 20 straight years in Hope Waddell. And my family lived in the staff quarters for 11 years.
The school started sometime in 1894 when the church mission that is now known as The Presbyterian Church started a school around the Mission Hill in Calabar. A year later,on March 8, 1895 the school moved to its permanent site and that date is now marked as the founder’s day. Although the church had previously opened a few other schools in Calabar, including the one in Duke Town (May 6, 1846), Hope Waddell was conceptualised as a comprehensive training centre for primary and post-primary studies not only in academics but also in technical skills such as teaching, carpentry, tailoring, bakery and masonry.
Interestingly, the gentleman for whom the school was named, the Rev Hope Masterton Waddell never witnessed the honour as he died back in the United Kingdom a few days after the Church Synod named the school in his honour. That news did not get to Rev Waddell before his death. It was an honour well-deserved for someone who arrived Calabar in 1846 to pioneer the Presbyterian Church mission in West Africa.
The contributions of HWTI to Nigeria and beyond are numerous,spanning governance, politics, arts, science and sports. While serving as principal between 1902 and 1907, Englishman, the Rev James Luke, introduced football to the school and on June 15, 1904, the first recorded football match in Nigeria was played in Hope Waddell between the school and the crew of an English naval ship HMS Dwarf and the school won 3-2. Later on when the game caught on across Nigeria, it was known as the ‘Calabar game’. At about the time football was introduced, a certain Mr. Foster, a Jamaican teaching staff also introduced the game of cricket to the school. Interestingly, the highest ranking Nigerian in international football administration, the late Oyo Orok Oyo who was vice president of the Confederation of African Football (CAF) and an official of FIFA, studied in Hope Waddell.
The list of notable alumni of the school includes foremost Nigerian politicians and nationalists such as Nigeria’s pioneer president, Dr Nnamdi Azikiwe; Prof Eyo Ita (elected leader of then Eastern Nigeria Government in 1951); Dr Akanu Ibiam (Governor of Eastern Nigeria 1960-1966); Dennis Osadebey (pioneer Premier of the Mid Western Region) and Dr Kingsley Ozumba Mbadiwe (First Republic minister).
We also have Vice Admiral Edet Akinwale Wey (former Chief of Naval Staff and Chief of Staff Supreme Headquarters); pioneer vice chancellor of the University of Lagos, Prof Eni Njoku and Adeniran Ogunsanya (former commissioner for education and later secretary to Lagos State government). Beyond Nigeria, the school also lays claims to Cameroonian, Nzo Ekangaki, former secretary general of the Organisation of African Unity (OAU), now known as the African Union. The school prides itself as having two of its old students on Nigeria’s currency (Dr. Nnamdi Azikiwe and Alvan Ikoku) just as two of the country’s international airports (Nnamdi Azikiwe, Abuja and Akanu Ibiam, Enugu) are named after its old students.
However, like many good things around here, the rot had since set in so terribly that few of the old students who brag about the school would be bold to send their children there now. The good thing though is that with the return of ownership of the school to the church and a new partnership between the church and the old students’ association, a brighter future is being designed for the school. As part of the 120th anniversary celebration, some resuscitated projects are being inaugurated and plan of action unveiled for a ‘new’ Hope Waddell which we hope would help fulfil the school’s motto of ‘In Spe Gloriaei Dei’, (in the hope of the glory of God).
We can only hope that the hope would be met just as the church Synod’s hope was realised when in naming the school after Rev Waddell, the members said: “No worthier wreath could the Synod lay upon his honoured grave than it has done by associating his name with what we trust will be for many years to come a fountain of ever growing blessing to Western Africa.” And it came to pass that that prophesy was fulfilled.
Share:FacebookTwitterLinkedInWhatsApp